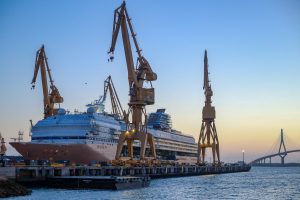 Standardising current fleets
The cruise interior refit market is also strong. Trimline commercial manager Simon Dawkins said cruise operators were standardising their public areas. “As new ships are delivered, they want to replicate the public areas found in these across the fleet. They want ships to all be up to the same standard,” explained Mr Dawkins. He singled out an example – when Trimline worked on Mariner of the Seas, one of the tasks was to replace the current solarium with a replica that has been added to its newbuilds.Another example is the refit Trimline carried out on the ultra-luxury Seabourn Quest. One of the refits included upgrading the elevators to bring them to the same standards as Seabourn Encore.“They have been made much more visually impressive, with fabric behind the glass, glossy deckheads, use of hidden LED lighting to illuminate,” he explained. This contrasts with the previous elevators, which used spotlights and had plainer deckheads.For Q1 2019, marine interior outfitters Trimline are working on cruise ship refits including RCCL’s Navigator of the Seas, Celebrity Millennium, Coral Princess, TUI Mein Schiff 2, Celebrity Summit and Marella Explorer 2, as well as ferry refits for DFDS Seaways and Condor Ferries.Marella Explorer 2 is an extremely large refit. It is in Cadiz undergoing an eight-week refurbishment to commence the change from Golden Era to Marella Explorer 2. Trimline is the main contractor on board Marella Explorer 2, and as with previous Marella Cruises refits, is responsible for the majority of the public spaces.A total of 43 km2 of carpet will be laid, along with over 70 km of network cabling and 640 wifi access points.Marella Explorer 2 is the second of the Explorer ships to be welcomed into the Marella Cruises fleet. The 1,814-guest capacity ship has 907 cabins across 14 decks.

New venues being added as part of the refit include a new golf-themed clubhouse bar, a champagne bar, Nonna’s, a traditional Italian restaurant and the Beach Cove, which has an al fresco dining feel.